Skip to content
HomeEleven essentials: the Bahai principles as taught by Abdu’l-Baha in London

Towards the end of his life, Baha’u’llah wrote a number of works that included numbered lists of his teachings. The Bisharat (Glad Tidings) and Tarazat (Ornaments) are examples. Abdu’l-Baha also wrote several letters that include such numbered lists of essential Bahai teachings, and he sometimes adopted the same format when speaking to gatherings. The records of these in English are often unreliable, but one of these “principles” talks does have authenticated Persian notes (here). It caught my attention because it includes “the separation of religion and politics” as a key principle and also refers to this as “not entering into politics” — a formulation that will be more familiar to Bahais. 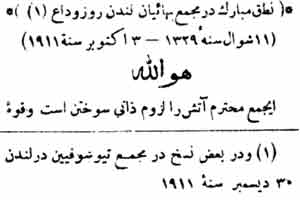 The talk was probably addressed to a gathering of Bahais in London on the day of his departure, 3 October 1911, but the Islamic date is given as 11 Shawwal 1329 = 5 October 1911. According to the footnote shown in the inset, “some Persian texts say it was a Theosophical Society meeting in London on December 30, 1911.” This should presumably refer to a Theosophical Society meeting on September 30, 1911. A correspondent has pointed out that this date is confirmed by “the published accounts and records of the London Theosophical Society.” An earlier report of this talk is published in Abdu’l-Baha in London (which incidentally shows that — contrary to earlier understandings — some talks in that book can be authenticated as Bahai scripture). Naturally that report, based on an interpreter’s words, is more compact than the Persian version which I have translated. Its list of principles differs, having the equality of men and women added as an implication of the oneness of humanity, and missing the ninth and tenth principles in the Persian text: that religion is separated from politics and on the education and training of women. A correspondent tells me there is another report in Contemporary Review 1912 which has the same structure as the one in Abdu’l-Baha in London. My translation below is based entirely on the Persian notes referenced above.

At a time when the divine religions had entirely decayed and the conduct of the people of the world had altered, when there were no glimmerings of the heavenly light to be seen, and benevolence was a thing of the past, when the darkness of bigotry and contention and slaughter reigned, and the winter with its gloom and cold prevailed, and shadows enveloped the world, Baha’u’llah arose on the horizon of Iran like a star. The lights of resplendent guidance shone out and the heavenly illumination dawned. He promulgated new teachings, reinvigorated the human virtues, revealed heavenly bounties and disclosed the power of spirituality. He brought the following fundamental principles into the world of existence, and promulgated them:

First, the investigation of reality. All religious communities are clinging to blind imitation and therefore are in complete disagreement with one another, and in bitter strife and conflict. However the appearance of reality uncovers this darkness and leads to unity in opinion. For reality admits no multiplicity.

Second, the unity of humanity. That is, all people are recipients of great and glorious favours, they are the servants of one God, they worship one Godhead. Mercy is extended to all, and every head is adorned with the crown of humanity. Therefore all the races and religious communities should consider themselves as brothers and sisters, they should regard themselves as the branches and leaves, the blossoms and fruit, of a single tree. For all of them are the descendants of Adam, all the pearls in one shell. At most, they are in need of education. They are ignorant, they are heedless, so they are should be guided. They are ill, they should be healed; they are children, they should be nurtured in the bosom of love so that they attain to maturity and reason; polishing is required until they are gleaming and luminous.

Fourth, religion and learning are twins that cannot be separated, or they are two wings on which you fly. A single wing will not suffice. Any religion that is bereft of learning is to be considered as blind imitation. It is superficial, not spiritual. Therefore the promotion of learning is one of the limbs of religion.

Fifth, religious bigotry, racial prejudice, political partisanship and national bias bring down the edifice of humanity. The reality of the divine religions is one, for reality is one and admits not plurality, and all the prophets are in the utmost unity. The prophets are the mediators of the sun: in every season they rise from a certain point. Therefore each has spoken of his successor, and that successor has confirmed the truth of his predecessor. “No distinction do we make between any of them.” [Quran 2:285]

Sixth, equality between individuals, and perfect fellowship. Justice should be so perfect that the rights of the human race are protected and assured and the rights of the public are equal. This is one of the essential requirements of life in society.

Seventh, the equalisation of the means of livelihood for all humanity, to the extent that all are freed from poverty. Every person should have enough necessities and opportunities to live at ease in a certain honour and position. Although the Emir may be glorious and be surrounded with prosperity, the poor man also should have some daily sustenance. He should not be left in a state of degradation, nor should he be denied the enjoyment of life due to extreme hunger.

Tenth, the education and training of women, their progress, and consideration and respect for them, since they are partners and co-equals of men in life and, with respect to their humanity, are on an equal footing.

These are a selection from the teachings of Baha’u’llah. He demonstrated perseverance and bore trials and afflictions to establish and promulgate them. He was always a prisoner, enduring punishment, heavily burdened, but in the prison he laid the foundations for this sublime mansion. From the darkness of the prison he illumined the horizons with this radiant light. The supreme desire of the Bahais is that these teachings should be put in practice. They strive with heart and soul, willing to sacrifice themselves for this goal, so that heavenly light may illumine the human race.

I am exceedingly pleased to have been able to speak with you in this respected gathering. I hope very much that you will accept my sincere reflections, and breathe a prayer in your hearts that you may be aided to attain to the highest distinction of the human world.

9 thoughts on “Eleven essentials: the Bahai principles as taught by Abdu’l-Baha in London”